The materials of tomorrow 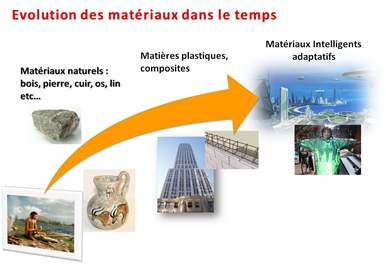 Since time immemorial, our societies have adapted and perfected themselves. The first civilizations were built on accessible natural materials: wood, stone, leather, bone, horn, linen or hemp.

We then experienced the emergence of plastics and composites with implications all around us, in the building, automotive, aeronautics, sports and military sectors.

Today we are entering the third generation, that of multifunctional materials, capable of adapting to their environment. This is the world of smart materials. This is a real revolution for the 21st century, just as important as the revolution in communication or biotechnology.

The house of tomorrow…

We can consider that the houses of the future as well as the offices will be populated with interactive materials. The house was initially a passive shelter to protect itself from the cold or the bad weather. It has become active with the arrival of fluids, energy, water and gas.

It has acquired “muscles” with household robots. It became truly interactive with the telephone, television and the Internet.

Unlike passive materials capable of fighting noise or heat loss (such as cork or glass wool), interactive materials will be able to adapt to their environment like a sensitive “skin. For example, darken a window when the light becomes too strong, when the external thermal energy is too high.

Biopolymers of the future…

One of the most spectacular breakthroughs in smart materials has been made in the field of biopolymer chemistry. These biomaterials have many applications in biotechnology and medicine.

Silk, collagen, cellulose, elastin, are natural biomaterials known for a long time. Recently, it has been realized that synthetic biomaterials can be used to treat or replace certain tissues, organs, or body functions. For example, certain polymer capsules implanted in the body allow the passage of molecules capable of permanently treating body ailments. Other biomaterials can be used as prostheses or heart valves.

Several laboratories use collagen, cellulose or even coral as a matrix from which natural cells, by dividing, reconstitute a damaged or missing part of an organ. For example, noses have been reconstructed by growing skin cells on such matrices, constituting a biodegradable scaffold.

Advances in chemistry, biotechnology and nanotechnology are opening up new avenues for the materials of the future. The era of smart materials has only just begun.

DNA, proteins and polysaccharides are intelligent biological materials. They are able to conduct energy at a distance, to react to environmental stimuli, to change shape, to recognize other molecules, to catalyze the fabrication of supramolecular structures. One of the objectives of researchers in the field of future materials is to be able to manufacture DNA biocomputers and mass memories using photosensitive proteins.

Another category of materials, with spectacular applications for our daily life, are the “interactive textiles”.

These are polymers capable of changing color locally according to a certain number of physical parameters, such as the passage of a small electric current, an increase in temperature or mechanical stress. Eventually, the coloring of a fabric will be produced by polymers capable of creating images, as if it were a computer liquid crystal screen worn on the back or on the chest.

It is easy to imagine the applications of these systems in the military sector, especially for camouflage. Combat suits made from these pigments carry tiny video cameras capable of detecting changes in the environment and immediately adapting the color of the combat suit to the conditions in which it is found. The infantryman of the future thus becomes a kind of chameleon capable of blending into his environment.

In the future, we can imagine combining information processing systems based on molecules with systems that serve as the basis for interactive textiles. It would thus become possible to wear computers on oneself where the communication systems would allow man to interface with the networks that surround him. We are gradually moving from the portable computer and telephone to the wearable computer and telephone.

Some of these applications are still at the research stage, but it is only a matter of weeks, of years to become reality…

Are you planning to integrate a smart color change technology? Our experts are at your side