What is a photochromic material?

A photochromic products (from the Greek photôs light and chromos color) is, by definition, made up of a pigment/colorant whose optical properties tune during illumination: like eyeglass lenses that change from transparent to dark under the effect of sunlight.

These photochromic materials are part of the vast family of X-chromic compounds, i.e. products that change colors under the effect of an external excitation : temperature, light, pressure, humidity level, etc. 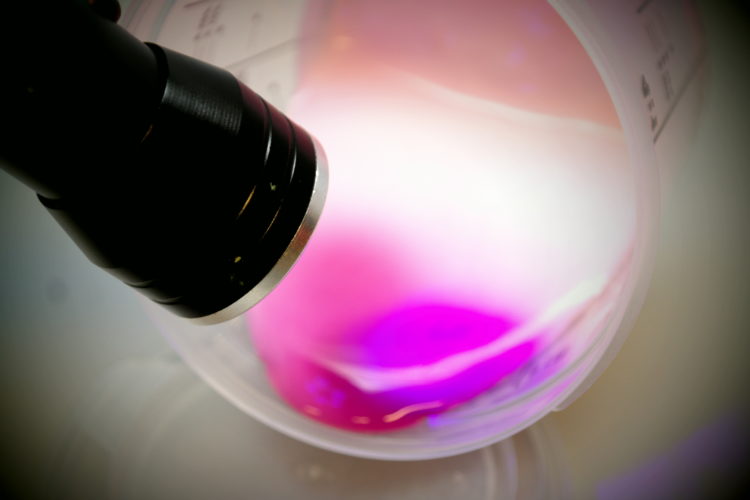 More specifically, a photochromic product is a chemical substance, organic, hybrid, polymer or inorganic, whose coloration is modified under the effect of an optical excitation following the appearance of stable/metastable states. This phenomenon can be reversible or not, and the kinetics is strongly dependent on the compound, the nature of the wavelength and the light intensity.

Photochromism is a reversible transformation, photo-induced in at least one direction, between two states A and B of a chemical species with different absorption spectra. The electromagnetic radiation inducing the transformation must belong to the UV, visible or near IR range.

The A → B transition is accomplished by excitation at a wavelength λA corresponding to an absorption region of the photochrom in the A ground level, and that of B → A by irradiation at a wavelength λB in the absorption region of the photochrom in the B (metastable or stable) excited level. In some cases, the B → A transition can be obtained by thermal reaction (Δ).

Depending of the return reaction from B to A, there are two types of photochroms: - type P, if the return takes place only photochemically; - type T, if the return can also take place thermally.

What are the main families of photochromic products?

Historically, the first description of a photochromic effect dates back to 1867. Fritzsche (C. R. l'Academie Sci. 1867, 69, 1035) reported the decoloration of a tetracene solution in sunlight, then its return to its initial color (orange) in the dark.

Today, photochromism is a property observed in many compounds, like biological derivatives notably associated with the mechanism of retinal vision. Reactions that do not require large conformational changes during light-induced phenomenon can be observed in solution as well as in crystalline phase.

They are certainly the most studied photochromic products. The chemical processes involved during illumination, which lead to colors changing, are numerous. It may be a structural transition (cis-trans isomerization around double bonds, proton transfer, opening and closing of rings), as a redox process.

Photochromism by redox reaction was discovered in the quinone and naphthalene family (Z. F Phys. Chem., 1899, 30, 140). In these systems, the optical transition is caused by the redox reaction which strongly changes the conjugation of the arenes.

Cis-trans isomerization is encountered in the derivatives of stilbenes, azobenzenes. They present an isomerization of the double bond C=C or N=N under UV irradiation. An example of cis-trans photo-isomerization is the "Disperse Red one" (DR1).

Intramolecular proton transfer isomerization is described for salicylidene-aniline compounds. Intramolecular proton transfer allows the transition from the enol unit (yellow in color) to the ketone form (red in color due to an n-p* transition of the oxygen free electron pair). Depending on the compound, the return to the enol unit may take a few seconds or several months.

Ring closure or ring opening isomerization is a mechanism encountered in two forms:

Spiropyrans and spiro-oxazines have been widely studied. Under ultraviolet irradiation, the carbon-oxygen bond breaks, followed by a cis-trans isomerization leading to the colored form called merocyanine.

Many hybrid products are composed of one (or more) organic photochromic antenna(s) linked to a metal ion. The conformational change of these antennas by isomerization and/or photo-induced cyclization can cause the coloring modification of the complex.

Among the most described photochromic antennas are azobenzene, spiropyran, diarylethene or quinone derivatives. The ligands used to connect the metal complex are frequently bipyridine, terpyridine as well as cyclopentadienyl substituted by an azobenzene group.

If we consider as an illustration the diarylethenes associated with metal complexes, the obtained products present the photochromic property thanks to the photocyclisation mechanism of the ligand. The described derivatives involve rhenium, platinum and zinc.

The most prominent example is the copper complex, [Cu(dieten)2](BF4)2 having two N,N-diethylethylenediamine (dieten) ligands. Under irradiation, the complex changes from a square planar conformation to a slightly distorted conformation that places the metal in a slightly tetrahedral conformation. The color change from red to purple is stable for several hours at 35 K.

The photochromic products with spin transition

Some derivatives have the particularity to change their spin state according to an irradiation. This change from high spin to low electron spin configuration can be accompanied by a color change. There are several types of transitions caused by irradiation. The LIESST (Light-Induced Excited Spin State Trapping) effect is the most studied photoinduced effect. It was first observed in 1984 (Inorg. Chem. 1985, 24, 2174) in the iron(II) complex with six propyltetrazole (ptz) ligands, [Fe(ptz)6](BF4)2. 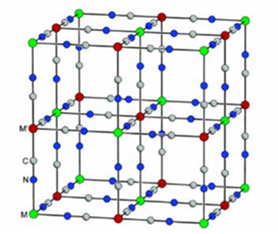 Some Prussian Blue analogues are known for their photochromic and magnetic properties. These materials, composed of two divalent and trivalent metal centers connected by cyano ligands, show a magnetization induced by irradiation. This is notably the case for cobalt-iron analogues (Polyhedron 2001, 20, 1339) which switch from the FeIIILS-CN-CoIIILS to the FeIILS-CN-CoIIHS form by excitation at low temperature. This transfer of electrons from one metal center to another is accompanied by a structural transition, with a modification of the absorption spectrum from green to red and a modulation of the magnetic properties.

Photochromic complexes with intraconversion of a ligand

The most studied compounds of this family are the materials with a nitrosyl ligand, such as sodium nitroprusside : Na2[Fe(CN)5(NO)].

Under the effect of light radiation, the redox reaction, Ag+ + X-→ Ag0 + X0 (X = Cl, Br, I) leads to the formation of silver colloids. The initially colored material becomes dark gray. When the excitation ceases, the reverse reaction takes place. The material returns to its stable configuration and recovers its initial coloring.

Another class of inorganic materials with photochromic effect is that of molybdenum-based oxides. Under UV excitation (of sunligh for instance), MoO3 changes from pale yellow to an intense blue. The color modification is due to the photoreduction of metal cations Mo6+ (4d0 configuration) to Mo5+ (4d1 configuration) under illumination.

Through this brief analysis of the existing, we have just reported the main materials and mechanisms responsible for the photochromism. Each of these families has advantages and disadvantages.

The property of a photochromic system is dependent on the chemical process involved, and four main factors must be taken into account:

What are the challenges of the food sector in terms of hygiene and safety?

Sustainable innovation in the field of luxury and fashion

Making colors speak to meet the challenges of tomorrow The worlds of luxury, fashion, cosmetics and aesthetics are almost entirely based on consumer desires. Managing a brand means finding […]

How to fight against corrosion in industrial environments?

Corrosion, an economic and environmental issue An abysmal expense every year Corrosion represents about 3.5% of the world GDP per year. Based on this rate, 84 billion euros are […]