Innovation: pedaling after dark without a lamppost, it will soon be possible

Pessac is experimenting with a photoluminescent road on a cycle path, in order to improve road safety. 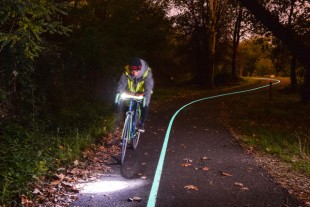 KEY FIGURES Equipment: 2 kilometers of luminescent track made with a paint that contains photoluminescent pigments

Hitherto plunged into darkness, two kilometers of cycle path now light up when daylight falls, in Pessac. No street lights, however. It is the floor marking, in this case a white stripe, that lights up.

“The paint used captures and stores the sunlight or that of the headlights, and restores it all night long,” reveals Jean-François Létard, founder of the Pessac-based company Olikrom, which developed this technology. “We approached this company when we were looking to innovate in the field of pavement, bus stops and lighting, as part of the Bordeaux metropolitan interest operation inno campus.

Olikrom was the winner, alongside the Eiffage group, of a call for future road projects operated by Ademe. This gave us a certain guarantee “, explains Arnauld Durouchoux, head of the” signaling “department in Bordeaux metropolitan area, manager of the cycle network of the Bordeaux urban area.

Photoluminescence, an innovation in the field of mobility

It was in this context that the test of this luminescent track was launched in real conditions, in September, in Pessac. It is carried out near a college and the headquarters of Olikrom, precisely in a place where the municipality had not found a solution for the lighting. “It would have been necessary to dig trenches, touch the roots of the trees and put down relatively low candelabras,” says Eric Martin, first deputy mayor of Pessac, who also tests the extinction of public lighting at night.

“There is no discussion on the merits of such a device,” explains Benoît Hiron, head of the user safety and travel group at Cerema, “but an assessment is necessary. “Beyond the validation expected from the Association for the certification and qualification of roads, a test protocol has therefore been put in place between Olikrom, Cerema and Bordeaux Métropole to measure retroreflection, slipperiness and durability. of this product. “It will also be a question of obtaining environmental guarantees, the question being whether this paint will not pollute the water tables. The conditions of use will remain to be defined.

We set off on cycle paths in unlit areas, ”explains Arnauld Durouchoux. However, other applications are being examined by Eiffage and Olikrom. “On pedestrian crossings, on bends in the countryside,” specifies, for example, François Olard, research and innovation director at Eiffage route. The aim is to find solutions to improve road safety. It should be noted that this marking improves visibility at night by approximately 50 to 100 meters. “

But at what cost ? While the cost of this top-of-the-line paint has not been disclosed, “it will always be less expensive than putting in place a new infrastructure. The luminescent road does not generate any electricity costs during its operation, “argues François Olard.

Bordeaux metropolis, for its part, would consider a cost halved, “but it is an innovative product and therefore necessarily more expensive. Let’s wait and see, ”adds Arnauld Durouchoux. “If other companies were to enter this market, they would have to be put in competition, as required by the public procurement code,” said Eric Martin for his part. In the meantime, the city of Pessac is paying nothing for this experiment, which should last a maximum of two years. Olikrom is considering marketing this year.Pedaling after dark without a lamppost, soon possible