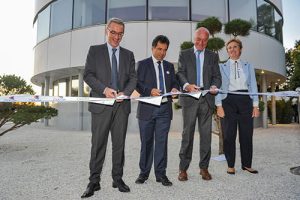 The inauguration took place in the presence of Alain ROUSSET, President of the Regional Council of New Aquitaine, Franck RAYNAL, Mayor of Pessac and Vice President of Bordeaux Metropole, and Sylvie TRAUTMANN, 2nd Deputy Mayor of Pessac responsible for the Economy, Employment and Training. This was an opportunity for Jean-François LÉTARD, the company's founding president, to bring together 160 people, including all of his partners, and also to take stock of the company's progress.

An achievement... and the beginning of a new phase of development

"When I decided to embark on my entrepreneurial adventure four years ago, the researcher I was then certainly did not expect to be here today to inaugurate this beautiful 1,600 m² site, in the presence of so many collaborators and partners," explained Jean-François LÉTARD.

OliKrom is now internationally recognized as the expert in color intelligence. The company has a clear technological lead in this market and intends to maintain it with this new building, in which it has invested more than 4.5M€. This site also allows OliKrom to begin a new phase of development: the pre-industrialization of its solutions. From now on, it is possible to design and produce in situ several 100 kilos of ink and more than a ton of paint daily. But this is only the beginning! The building has been totally redesigned to evolve with the company and to absorb a strong growth in activity and staff. 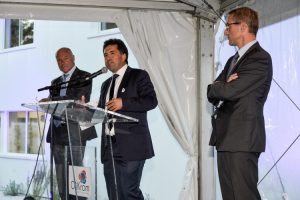 And for Jean-François LÉTARD, "this success is collective! We owe it to the OliKrom employees first and foremost. I am fortunate to work with a dedicated and loyal team, which is growing every year (14 employees today). I would also like to thank our industrial partners, such as Eiffage, Airbus and Safran, with whom we are co-constructing the intelligent pigments of tomorrow. Finally, I would like to thank the local authorities who have supported us. The regional council of New Aquitaine is an important supporter: recently, its elected officials have granted us a €650,000 subsidy to help finance the acquisition of this site, and OliKrom is one of the 5 companies selected for the first promotion of its UpGrade gas pedal. Bordeaux Metropole also contributes to the attractiveness of its territory, for us as well as for all the companies linked to the campus, thanks to the OIM (Opération d'Intérêt Métropolitain) Bordeaux Inno Campus in the heart of which we are now located.

Franck RAYNAL, for his part, praised OliKrom's commitment to keeping its headquarters and R&D center in Pessac in the future, even if the company's strong growth were to push it to produce its solutions outside the Metropolis. "I am delighted that our region can serve as a playground for experimentation and innovation for companies like OliKrom," he said.

Alain ROUSSET's speech also touched on the dynamism of the region, whose stated objective is to support the development of start-ups, VSEs and SMEs towards the ETI format, thanks in particular to the Up Grade program. He explained: "The support given to Olikrom is fully consistent with the orientations of the Start-Up Region roadmap deployed since 2016: to bring out projects in connection with the regional industrial and technological fields of excellence. And give birth to the champions of tomorrow from the most promising projects."

Smart pigments, What is it? ?

Extremely resistant, programmable, with a choice of colors, reversible or not... OliKrom coatings offer a wide range of potential applications for security and traceability.